What is Rockman EXE x Hanayashiki?

Held from February 6th to March 21st, 2016, the Rockman EXE x Hanayashiki Mission is a crossover between Capcom and the Hanayashiki Theme Park in Asakusa. Produced to observe the upcoming fifteenth anniversary of Rockman EXE, word of the event was first spread through the official crossover website, which went live on January 27th. It was also promoted by the official Hanayashiki Twitter account, and on the Japanese gaming news portal Gamer. The event includes appearances by NetNavis Blues.EXE and Rockman.EXE in the actual theme park, as well as the sale of EXE merchandise on the park grounds. Hanayashiki is Japan's oldest theme park, dating back to 1853; when the park first opened its doors, the samurai class had yet to be abolished. 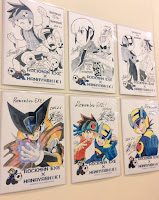 Aside from a holiday on February 23rd and 24th, the Rockman EXE x Hanayashiki Mission has run continuously every day for this period. The mission as a whole is a sequel to the original Rockman x Hanayashiki event, which had a similar stamp rally, framed art, and merchandise drawing on the classic Rockman series rather than EXE.

The fist half of the event took place from February 6th to 29th, and the second half is currently taking place from March 1st to 21st. The storyline for the first half of the event presented on the website is that Hikari Netto and his friends took the metroline to Hanayashiki theme park, where they suddenly encountered the supposedly-disbanded World Three (WWW). The WWW members stole everyone's PETs, including Netto's, but at this desperate moment they stumbled onto Hanayashiki's NetNavi in the park's exclusive PET, "Hanayashiki.EXE." Along with Hanayashiki.EXE, Netto tries to rescue Rockman and the others.

The event consists of a stamp rally; to save Rockman, fans have to use booklets with hints written in them to find the stamps of Rockman and the other stolen NetNavis. The Hanayashiki PETs serve as stamp cards, and participants travel to different parts of the park to complete missions where they'll find a Navi's stamp and then stamp it onto a stamp card (putting them in the PET). After collecting every stamp, fans can present it to a representative to get an original novelty item--the first and second halves of the event each have their own clear files, corresponding to the missions "Stop Dr. Wily's Ambitions!" and "Defeat Forte!

Stamp rallies of this type are a uniquely Japanese event, used as a way of getting participants to visit every location at a given event space. By filling out such stamp cards, participants both satisfy the host's desire to show off the space, and their own desire to win a prize or entry into a gift raffle.

Players were actually required to complete one such rally near the end of Battle Network 6: Cybeast Gregar & Cybeast Falzar, as part of the Cyber City Expo. (Coincidentally, Takamisaki also came across and recently shared this old Rockman advertisement from a 2002 Coro Coro stamp rally.)

A line of original goods are being sold at Hanayashiki, featuring both Rockman.EXE and classic Rockman. The goods include T-shirts and parkas, totebags, acrylic keychains, stickers, and badges. Fans can also win postcards and badges at on-site lotteries. (Again, the first half and the second have different prizes.) Some aspects of the park have been temporarily converted to promote the EXE series, with many of Hanayashiki's gashapon machines being made into "chip traders" that dispense Rockman EXE x Hanayashiki pins in their capsules rather than their standard payouts.

The restaurants at Hanayashiki feature special meals prepared by World Three. Each meal comes with an 8-bit version of a Rockman EXE character, selected from among Netto, Blues, Rockman, Hanayashiki.EXE, Forte, and Roll. The foods are;

Effective March 5th, fans can also purchase character mugs with their drinks at 1600 yen each. The blue mug features artwork of Hanayashiki.EXE with Rockman and Netto, designed by EXE and Ryuusei no Rockman illustrator Higurashi Ryuji. Rockman fans can also get a special 2,000 yen ticket just for the stamp rally, which in addition to standard admission can be exchanged for a Rockman EXE x Hanayashiki keychain (first half) or a Hikari Netto x Hanayashiki keychain (second half). (Standard tickets for adults at Hanayashiki Theme park are usually 1,000 yen.)